Every city, they say, has a life of its own — a spirit that defines it and its people. Most times, it is an adjective, singular in its description “brilliant, crazy” other times it is a statement; “the city of Angels, the city of lights”.

Lagos is known for many things; it’s unrelenting traffic, the perpetually noisy ambience, a vibrant nightlife and its beautiful and ugly side co-existing in chaotic harmony, a case study in contradictions. Lagos has had many identities that changed over time, and in this, it is a revolutionary city. It was the capital of Nigeria, then the commercial capital of Nigeria, then a megacity/state, and now it is embarking on a new journey; the city is on its way to being called a smart city.

McLaren Duncan and Agyeman Julian in their 2015 book, Sharing Cities: A Case for Truly Smart and Sustainable Cities define a smart city as “an urban area that uses different types of electronic data collection sensors to supply information which is used to manage assets and resources efficiently. This includes data collected from citizens, devices, and assets that are processed and analysed to monitor and manage traffic and transportation systems, power plants, water supply networks, waste management, law enforcement, information systems, schools, libraries, hospitals, and other community services”.

Lagos took the first step in becoming a smart city in June 2016; the government signed a memorandum of understanding with Dubai Holdings LLC, owners of Smart City Dubai LLC, to “develop sustainable, smart, globally connected knowledge-based communities that drive a knowledge economy. To be located in Ibeju-Lekki on the outskirts of Lagos, a Smart-City Lagos will be the pride of all Lagosians, just as we have Smart City Dubai, Smart-City Malta and Smart-City Kochi (India).”

With a population of 20 million people, Lagos is a city of great potentials. It had a gross domestic product (GDP) of about US$136 billion in 2017; the city is said to have the seventh largest GDP in Africa. The city has all it takes to be a truly smart city. So, where does the city currently stand?

Inarguably, the most important feature of a truly smart city is high-speed wireless communication features. In May 2017, as part of activities to mark the 50th anniversary of Lagos, the state unveiled public Wi-Fi at Ndubuisi Kanu Park in Alausa, Ikeja. This is one of several recreational parks across the state to have free Wi-Fi.

Data from the National Bureau of Statistics (NBS), in 2017, showed that Lagos State leads in terms of internet usage in Nigeria. However, in terms of spread, cost and efficiency, it could be so much better, compared to other smart cities in the world. Public spaces should generally have free and fast wireless connectivity.

“Smart city solutions demand advanced energy networks that are sustainable, secure, dynamic, and resilient.”  Before can Lagos can truly earn the ‘smart city’ moniker, it must fix its power problems.

Most Lagosians, if not all, provide their own alternative energy. The net effect of this is pollution. This is evident by the unforgiving hum of generators in the city, day and night, day in, day out.

A smart city should have moved beyond the traditional energy sources and be utilizing green and efficient energy. For Lagos to be a truly smart city, it should not rely on the national grid for its energy needs, especially with a population as huge as it currently boasts.

If properly utilised, first respondent agencies such as the police and fire service will be able to do a better job of securing lives and properties. A smart city is a safe city.

Data capture should be a key focus of a smart city.

Accurate capture of data will help government anticipate and prevent problems, make better decisions and create solutions to ease the way of life of its residents. This also ties into the general comfort level of residents of a smart city – being able to make decisions based on available data, whether it is a choice of a residential area or whether to take a particular route to work.  A data-informed way of living.

Lagos falls short in this regard and will need to meet up to be a truly smart city.

Lagos with the rest of Nigeria lacks a proper maintenance culture. Smart cities should be able to maintain the hardware that supports its smart grid. And most importantly, should be able to upgrade even as technology evolves. It remains to be seen how Lagos will handle this challenge.

Perhaps the most exciting thing about cities of the future will be how the public spaces become an interface. As the world moves from wired, to wireless to ambient (think Lagos’ own Alexa), Lagos still straddles a wired and occasionally wireless space.

A key that will probably unlock this is seamless design, will be the work of forward-thinking architects and designers. Imagine being able to turn a flat surface in a public space into a workspace, complete with responsive voice and virtual augmentation. That truly is a smart city. Until then, one can only imagine and Lagos still has miles of catching up to do to be able to glean even the slightest of such wild imagination..

To create a fully smart city, there is an aesthetic aspect to it that is practical, beautiful, inspired and daring. This can be argued to be where Lagos scores its highest point. The face of Lagos is gradually changing, aesthetically. More could be done, and it is up to brilliant designers, inspired by technology to fully usher us into a truly smart world, sparkling with beauty and imagination.

If the Lagos smart city initiative is successful, it will be the first in Africa. For this to work, there has to be a vision cognisant of the current realities of the city, but inspired by the imagination of what could be. There also has to be policies put in place to encourage innovation. The government also has to partner with private organisations to deliver high-quality smart solutions.

One of the current government’s goals in building a smart city is to provide a 24-hour driven economy, true to the apt description of Lagos as the “city that never sleeps” 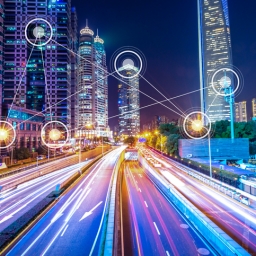 Smart City Initiative; Beyond the Glitz and Glamour
July 11, 2018